This morning, the U.S. Economic Development Administration (EDA) awarded a $50 million federal grant to H2theFuture, a 25-organization partnership with representation from across South Louisiana.  H2theFuture will develop a new energy cluster in South Louisiana, spanning the clean hydrogen life cycle, from R&D at Louisiana universities, to an end-use project at the Port of South Louisiana.

“We are grateful for the vision of the U.S. Department of Commerce and Economic Development Administration that made H2theFuture possible,” said Michael Hecht, CEO & President of Greater New Orleans, Inc.  “Moreover, we want to recognize that this exciting project has come together due to the work and trust of two dozen organizations across South Louisiana, and we extend our gratitude to these outstanding partners, as well.”

This award is one of 21 projects from around the country chosen from 529 applicants that were funded by a $1 billion appropriation from the American Rescue Plan Act, which aims to boost economic recovery from the pandemic and rebuild American communities, including those managing decades of disinvestment. The grant will be supplemented by $24.5 million in matching funds provided by the State of Louisiana, bringing the total project size to $74.5 million.

“Today’s announcement by President Biden and Secretary of Commerce Raimondo is a significant milestone in Louisiana’s transition to a cleaner, more sustainable and more diversified energy future,” Gov. John Bel Edwards said. “As the first state in the Gulf South to implement a Climate Action Plan, Louisiana has demonstrated the vision and leadership required to meet the historic challenge that climate change represents. This infusion of federal and state dollars, on top of the nearly $20 billion of private capital investment in Louisiana emissions reduction projects announced in the last two years alone, moves us closer to the ultimate goal: net zero carbon emissions by 2050.” 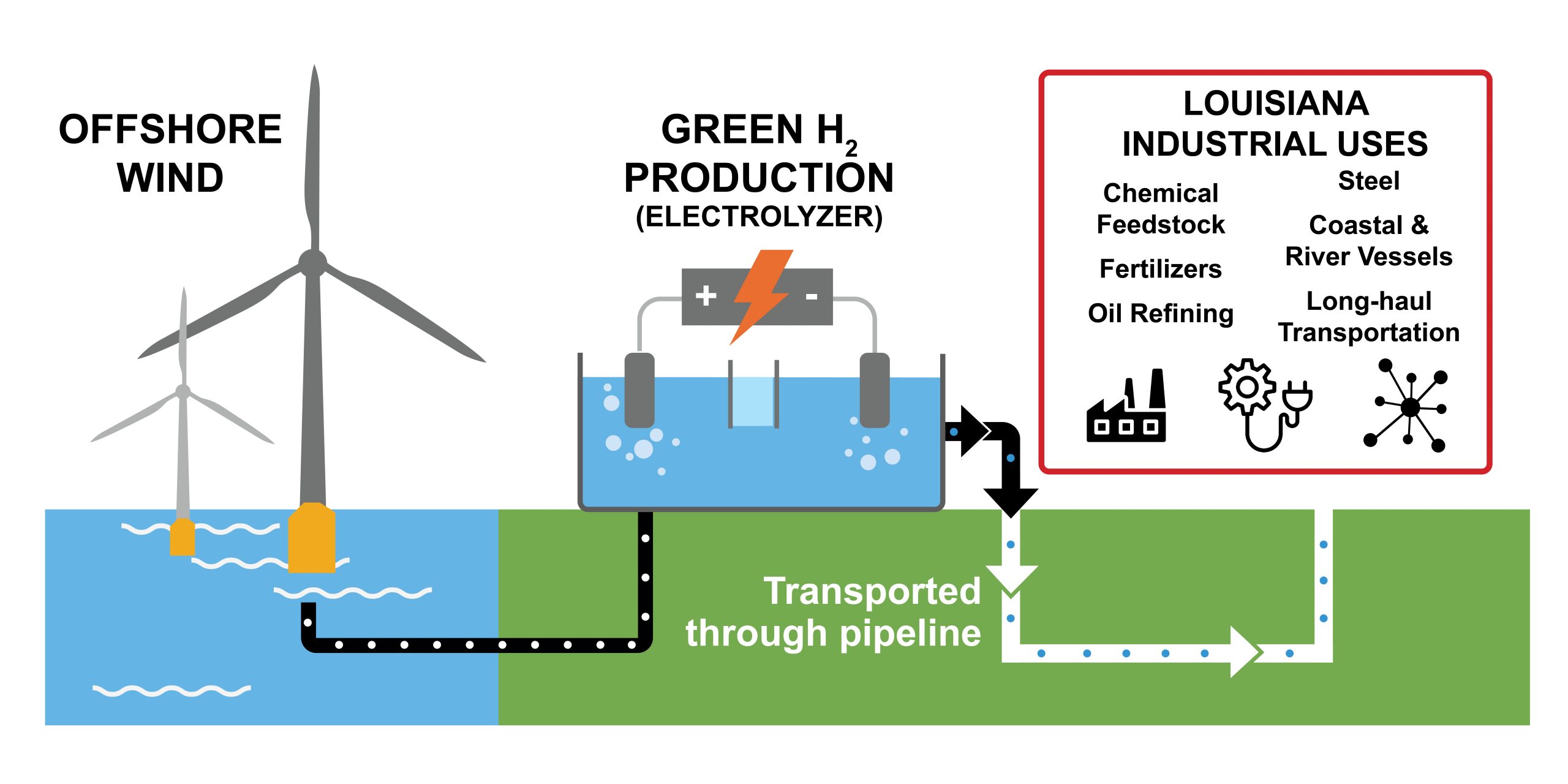 H2theFuture, led by Greater New Orleans, Inc. and its affiliate Greater New Orleans Development Foundation, will develop and implement a clean hydrogen cluster strategy that will retain and create Louisiana jobs, while substantially lowering carbon emissions in the South Louisiana industrial corridor. The H2theFuture Coalition will execute projects across five interrelated workstreams, which are each individually funded by this grant:

H2theFuture is positioned at the intersection of the economy and the environment:  green hydrogen has the potential to reduce total emissions produced by hydrogen in Louisiana by as much as 68% in Louisiana (McKinsey & Co.)

Green hydrogen is different from traditional, “gray” hydrogen in that it is made from water, as opposed to natural gas.  The hydrogen is extracted from water by an “electrolyzer,” which is powered by offshore wind-generated electricity.  The result is an H2 molecule that is chemically identical to one made from gray hydrogen, but with zero carbon footprint.  This hydrogen is then used as a feedstock for the production of ammonia (for fertilizer), refining oil and steel, and other processes; it can also be used for fuel.

“Securing one of the coveted Build Back Better Challenge awards solidifies Louisiana’s status as a global leader in the energy transition and a prime location for renewable energy investment and innovation,” LED Secretary Don Pierson said. “An economic development project of this scope and complexity requires an extraordinary level of stakeholder collaboration and cooperation. LED is proud to have played a role in leveraging existing economic partnerships and helping to forge new ones to move our entire state forward.”

“Congrats to the whole H2 team for the EDA Award, which shows the power of collaborative leadership,” said Adam Knapp, president & CEO of the Baton Rouge Area Chamber. “Our team at  BRAC  is all in to make this a success. Already, Louisiana is ‘ground zero’ for net zero, with over $18 billion of projects announced for renewable biofuels, blue and green production of hydrogen and ammonia, advanced recycling, and carbon capture. This EDA grant will capitalize on this momentum helping to anchor a new sector and supply chain from decarbonization efforts throughout the south Louisiana industrial corridor.”

A significant element of the H2theFuture strategy is retention, development, and upskilling the state’s workforce.  Louisiana has seen more oil and gas job loss than any U.S. state, with nearly 22,000 positions lost from 2001 – 2020 (Emsi).  South Louisiana’s offshore oil and gas workers have transferrable skills to support offshore wind and additional green hydrogen-related occupations.  With a focus on helping these trained professionals explore new career opportunities that are part of this hydrogen evolution, the H2theFuture coalition aims to:

“No one understands the need for resilient, equitable growth better than the people of Louisiana,” said Monty Sullivan, President of the Louisiana Community and Technical College System (LCTCS).  “In times of change, we must ensure that our systems are flexible and responsive to the needs of our industry partners, and that we provide access for all our people to the jobs of the future. As part of H2theFuture, LCTCS will lead H2Workforce (H2W), to build the next generation of energy workers. With multiple partners working together, H2W will develop and launch new energy curricula across LCTCS institutions and provide equitable pathways from training directly into high-wage, new energy careers.”

For decades, Louisiana has been an “energy state,” with more oil and gas jobs per capita, more pipeline per square mile, and more energy ingenuity than anywhere in the U.S. As Louisiana moves into the “energy evolution,” H2theFuture will work with South Louisiana’s four Historically Black Colleges and Universities (Dillard University, Southern University and A&M College in Baton Rouge, Southern University of New Orleans, and Xavier University of Louisiana) to prepare students for emerging executive jobs in the new energy sector, and encourage the development of entrepreneurial concepts through industry-aligned curricula as well as direct internship opportunities.

“As this nation and world adjust to a new energy economy, hydrogen will be a vital and green feedstock and fuel that powers our future,” said Reynold Verret, President Xavier University of Louisiana.  “Xavier and other Louisiana institutions will contribute to the dawning of a new day, in how we fuel our lives in clean and sustainable ways, by educating the talent needed to lead the development and implementation of new technologies, practices and business models and to conduct the innovative research that will map our course forward.”

Louisiana is perhaps better positioned for a clean hydrogen cluster than any other state, with the highest per-capital use of industrial H2 in the United States, and many other intrinsic advantages. This area is home to many relevant assets, including ports, pipelines, and people with decades of experience in energy and industry.

“The Port of South Louisiana has a long history of fueling the nation and the world,” said Paul Matthews, CEO of Port of South Louisiana. “Our Port has committed to leading America’s energy transition along the Lower Mississippi River and we are thrilled that this “first of its kind” Hydrogen Fueling Barge will bring a fleet of low carbon vessels into commerce. This is a small, yet meaningful step in a larger movement to reduce our carbon footprint and broaden an energy economy for the families of South Louisiana.”

The H2theFuture award will inject critical funding throughout the network of partners, allowing for the creation of 21 innovative and impactful projects spread across five focus areas. These projects include, but are not limited to, the development of clean energy and electrolyzers at the University of Louisiana at Lafayette; the creation of a physical research, education, and innovation hub (NeXus Center) within The Beach at UNO; and the construction of a hydrogen fueling barge for Mississippi River tugboats which will be located at the Port of South Louisiana.

An overview of these projects, an interactive map of their locations, and information on all 33 program partners can be found at H2thefuture.org.